I meet Ron Shiffman at The Pratt Institute, School of Architecture which is situated in a part of Brooklyn where global forces are rapidly changing the fabric of local communities. In short one can say that one kind of segregation mostly based on race now is changing to a segregation based on income (which is not unrelated to race). I was staying in the Bed-Stuy neighbourhood that could be called the ground zero of struggle against gentrification.

This is also one of the main concerns of Ron Shiffman now Professor Emeritus of the Pratt Graduate Center for planning and the environment. As a result of of a lifelong engagement with the development of the New York City he has a quite clear conclusion on the dynamics of the city and especially the efforts of the new (2013) mayor, Bill de Blasio, to create more affordable housing (this not least being based on the many efforts, reports etc. of the Pratt Center): There are two governments in NYC. One is democratically elected and the other one is the developers.

However I am there to meet Ron more because of he’s role of setting up the Pratt Center for Community Development more than 50 years ago. And to discuss the book, Beyond Zuccotti Park – about the Occupy Wall Street location – that he edited a couple of years ago. One of the main concerns of the book is the lack of public spaces in New York and in the USA in general where a political dialogue can take place and have an openness for dissent or insurgent spaces.The layout of New York with street grid and large parks – Central Park and Prospect park in Brooklyn that are not open for demonstrations – doesn’t really have public spaces that can accommodate a large crowd. Zucotti Park became a unlikely and in many ways an ideal location since the small size gave it an intensity, being both close to Wall Street itself and (therefore) privately ownership ironically made it harder to evict the occupiers.

I had also read the interesting book, The Democracy Project by David Graeber that goes into details on the the more political and organisational aspects of OWS, and I thought it was interesting to cross-connect the political and more spatial aspects of the the book Ron had edited. Where the public spaces not only allowed the gatherings of protest but also actively facilitated the discussions by spatialising the dialogue or facilitating the discussions with spatial interventions.

What makes the Pratt Center (for Community Development) interesting is the connection between an educational institution – Pratt Institute (of design) and a separate organisation that engages in communities in ways that involves the ressources of the institution for the benefit of the communities and the knowledge for this involvement also benefits the education. this work had three levels that each would support each other: the direct work with communties, capacity building (communities but also the education) and policy. In this way the direct work helping communities e.g. in the struggle for environmental justice – avoiding to place public infrastructure in communities with less ressources – would by inform and be informed by work on policy level. In-between would be capacity building where both students and community leaders would engage in learning processes that links to both the everyday situations on the ground and the structural and political aspects.

The connection to the institution – Pratt institute – could be both a blessing in the form of more leverage but also involve the inertia of such institutions. An important aspect was the the academic freedom that followed into the work in communities being able to act as a more independent facilitator compared to actors with more vested interests such as the planning authorities. The first early projects connected to communities of immigrants in Brooklyn – initiatives that are still alive and important parts of Williamsburg. Another engagement was in The Point, Bronx with the motto: Where community and creativity connect what sounds like a hipster paradise but the neighbourhood and the murals that explains what to do in case of arrests or police search says something quite different. See photos below.

Pratt Center is a part of movement of Community Design Centers across The USA that began in the mid 60´s and where most of them has disappeared again but it can still be found in e.g. Rural Studio that is linked to the school of Architecture in Auburn University, Alabama. 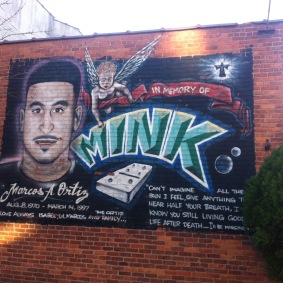 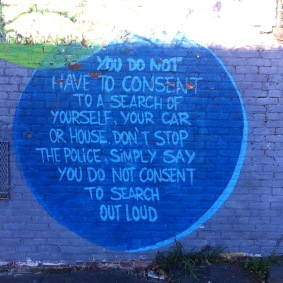