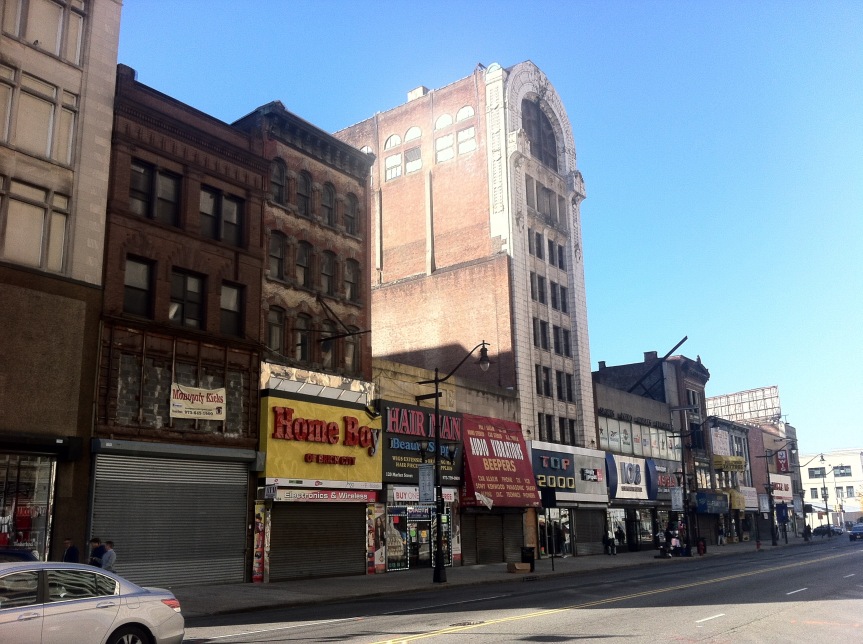 On the sunny day in November the city of Newark, New Jersey, was almost too clean and people who were looking after the central part of town was driving around on Segways. It was quite clear that an effort had gone into making the place look good but it was unclear for whom this tidiness was intended.

I met with the leader of Strong Healthy Communities Initiative, Monique Baptiste-Good, in their clean and beautiful offices on a square with remarkable many organisations addressing homelessness, alcoholism etc. One of them with a sign welcoming president Obama who was there the day before.

Newark is less know for urban shrinkage compared to Detroit in spite of having experienced a drastic decline in the number of inhabitants from 500.000 to 270.000 today. SHCI was working the the South Ward that could be seen as the canary in the coalmine regarding massive problems that especially affects the children.

The background for SCHI is the wish to work with communities in new ways not least inspired by the ideas of collective impact that is using the experiences from the Strive Network in Cincinnati, Ohio, as an inspiration. Here they managed slowly to work with the many different stakeholders and local actors to identify some of the major problems and especially setting common goals that allowed a much better coordination of the effort to solve the problems.

In Newark the focus was not on the schools themselves since a very large donation from Facebook already did that, but the argument for SHCI was that it was not enough to stop at the school gates – as the Facebook funded activities did – but to have a more holistic approach that also looked at the situation for the kids at home and especially the health problems that prevented children from poor families to get better results in schools.

Monique used to work in a Community Regeneration Cooperation that can be seen as the old way of dealing with the problems related to e.g. poor neighbourhoods. These much more institutionalised organisations were a product of the 60´s and 70´s and tended to become more like a permanet municipal set of services instead of the initial intention of being a temporary solution to a set of problems. Collective Impact is typically organised by a number of philanthropic foundations that pool their efforts to achieve a bigger impact and in a way applying the same strategy on the ground by coordinating what is already there especially institutions and services such as schools and the health system to work better together.

SHCI was the local organisation that functioned as a offshoot of the central nationwide organisation Living Cities and as such received not only funding but also knowledge, ressources and maybe most important clout. It Was Living Cities that originally referred me to go and meet with SHCI to get a closer look at what their methods were like on the ground. Maybe it was symbolic that even though I got to Newark I never came to the South Ward which would have been really on the ground.

What seemed to be the main challenge in the project was to convince very big actors such as the health system and the municipal school administration to get motivated in the first place and see a common interest in coordinating efforts to achieve common goals in spite of the good results from Cincinnati where they focused on better results for kids in schools. Some of the problems with those actors and systems was when changes in leadership affected the efforts to coordinate the different institutions since this often based on personal contacts.